Faith Action Team (FACT) came into existence in the spring of 2016 to plan and create a conference that took place Oct 8th, 2016. We have held a series of educational events (see below) and on Oct 28th, 2017 held a second climate conference with 200 people.   It exists as a separate, but sister organization to 1SP and is under 1SP's C-3.

Sunday June 23rd We gave our first FACT on the Road service at Seattle Mennonite Church.
Listen here to hear sermons which were given by Abby Brockway, Lynn Fitz-Hugh and Keith Ervin.  https://seattlemennonite.org/faith-action-climate-team-reflections/ 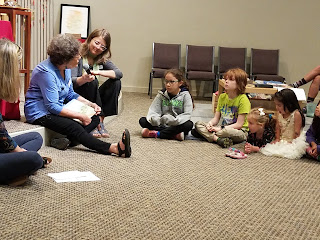 The bible verse from Luke that we addressed ourselves to, was the one that this Congregational nationally was focusing on.   SMC does a lot of singing as a Congregation, so we brought songs we invited them to join us in.   We have a collection of songs about earth care, climate change and hope and the power of people for transformation.  This Congregation also has in its normal structure the bringing of the children up onto the alter while an adult reads a story to them.  This picture is of Judy reading a children’s book about Wingri Maathai, the woman who won a Noble Prize for planting trees across Africa to stop desertification.

Jan 2019
How we Win training with George Lakey held at University Friends Meeting to look at how we learn effective tactics for non-violent social change. 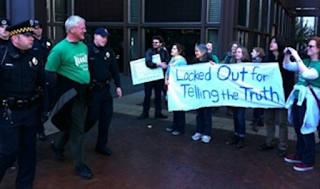 June 1st 2018
FACT held a worship service at PSE praying for them to have a change of heart - to change their 20 year plant to remove fossil fuels.   A letter was delivered during the service to CEO Harris 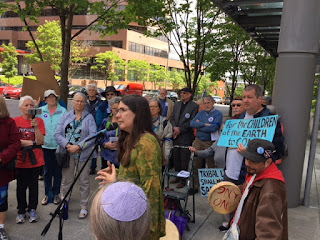 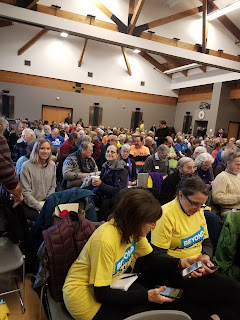 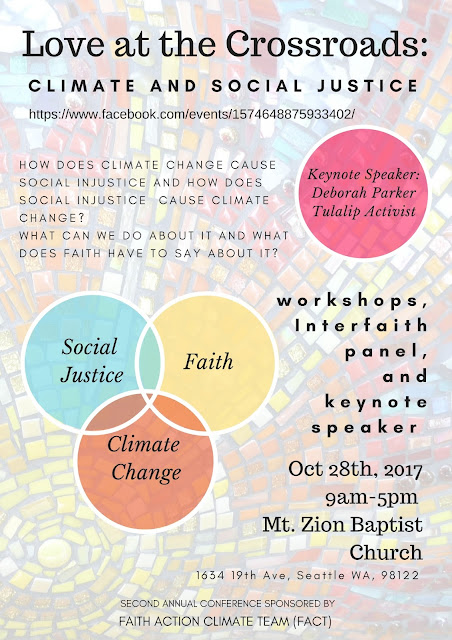 Please check out if your bank is on this list?  Might be time to move your money?  We will try to coordinate a day of people moving their money. 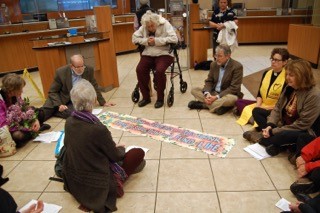 Hello Faithful Folks:
This is to update you on the Praying in Chase Bank event that you were invited to last week which took place yesterday at the Capitol Hill branch of Chase bank around 10pm.  We are really thrilled by the event.  About two dozen FACT members gathered including 5 clergy – some inside the bank some outside.  We were able to hold at least an hour long prayer service, including prayers, silence and song, in the bank which was felt by all.  We conducted ourselves in a spirit of nonviolent peacefulness and respect for all we encountered which was felt by them. Abby overheard one bank customer saying:  “Is this a bank or a church?”  Our own participants noted the difference in how the experience felt compared to other events they had attended that included angry chants and hostile confrontations.  The bank manager and the police expressed deeply conflicted feelings and made clear that they did not want to arrest us.  The officer in charge actually pleading with us to leave so he would not have to arrest us. They outright refused to arrest our 86 year old member saying “I do have a conscience”. Our spokesperson saying to the police: “The earth is in trouble. We have to do something.”

Please go to our sister organization 1 Sustainable Planet’s Facebook page to see pictures and also some short video’s of the beginning and middle of the prayer service and folks being released from jail.   The good news is the 4 people arrested were not booked and their cases were simply passed on to the prosecutor’s office.   It seems unlikely that any charges will be filed.  A special thank you to those of you who came out for this event.

Some of you who are either on the 350Seattle mailing list or the former Pledge of Resistance mailing list are aware that 350Seattle is organizing a major action for Monday May 8th in which they have affinity groups planning to sit in the major branches of Chase bank to demand that they not fund the XL – Pipeline.

FACT will also be holding a Pledge action to oppose the Pipeline.   Both Lynn, Abby and Sally Jo have been working against the XL pipeline for roughly 5 years.  This past Dec FACT also opposed pipeline funding by holding a pray-in, in the Lake City Wells Fargo to protest their funding of the DAPL pipeline.  Despite Trumps attempts to revive the KXL which President Obama had cancelled, this can only happen if there is $5 billion dollars worth of private funding of the pipeline.   So far there is not enough committed funding and Chase is the biggest potential funder of the pipeline.   The Pledge of Resistance which began 5 years ago against the KXL and eventually had over 100,000 signers nationally pledging to commit civil disobedience to stop the KXL has also now revived.

We are carrying out this action in coordination with 350Seattle.org, but on a different day and in a different spirit.   We are not threatening to “shut down” the bank, but we are coming to negotiate with the bank, “to speak to that of God” in the bank manager, and to the raise the moral issue of profiting from the destruction of the world as we know it.   We are coming to pray for the conversion of hearts and the opening of conscience.  We are coming with the faith belief that all major religions contained within our interfaith coalition have: that God has the ability to enter the impossible and that which is evil, and where there is suffering and to transform it.  There will be a number of clergy joining us and we will be holding prayer services both inside and outside the bank.  Even if you have no interest in getting arrested you can join us for the legal prayer service which will be outside of the bank.

We welcome you to join us on Friday at 10:00 am.   We are not sending the location out by email but if you are interested in joining us, please email immediately with your phone number and you will be called with the location.  If you do not come we encourage you to join us in prayer and to pray for our success.

Community solar installations, larger than typical rooftop arrays, can be installed by utilities or nonprofit organizations on churches and other places of worship. Individuals or organizations can buy shares in community solar, receiving monthly payments or various kinds.  Learn about the WA state policies regarding solar and interesting ways of financing community solar as well as other ways of reducing your faith communities carbon footprint.